Let’s talk about cell phones. Have you noticed that people in general are so focused on these small screens that they forget where they are and become almost hypnotized?

Here are a few incidents that I’ve observed.

Everyday as I walk I pass people staring into their cell phones instead of looking around at nature or art or other interesting things going on around them. I think it’s weird that people will pay good money to go to a movie with their friends, then spend most of the time in the dark theater texting and even talking on their phones. Not only is that extremely rude to the others in the theater, but it seems so pointless. Why not just stay home?

Cell phones have even been the cause of major train accidents

In 2008 there was a major train collision in Chatsworth, California,  which killed 25 people and injured over a hundred more. At first it was reported this horrible crash was the result of malfunctioning lights, but upon investigation it was discovered actual cause was the engineer was texting and failed to pay attention to the perfectly working signals. [2008 Chatsworth Train Collision]

That’s an extreme example, or at least it seems, but every year thousands of people are injured or killed because someone was texting or talking on their cell phone while driving. 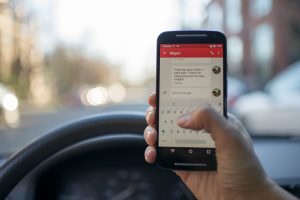 It’s hard for the younger folk to believe, I know, that not everyone carried a cell phone until just a couple of decades ago. There was a time when the way to make a call was to use your home phone (yes, a land line) or a carry some quarters so you could use the local payphone. Good luck even finding a payphone these days, and they definitely cost far more than a quarter.

It is possible to survive without being connected to the net (or whatever) 24 hours a day, seven days a week. In fact, it is actually far healthier and better for life and living to put the damn phone down, turn it off, and do something, anything, that doesn’t involve a tiny screen and a miniature keyboard.

I know I’ve been guilty of this very thing for years. I’ve glued myself to my phone as a way to avoid talking to people or just to have something to do while eating in a restaurant. I’ve argued on phones in public, I’ve walked into the road without looking because I was intent on the screen, and yes, I have talked and texted while driving (and received a ticket or two because of it).

But no more. When I drive, the cell phone now goes in the trunk. It can still connect via Bluetooth to the HD radio so I can still receive calls if I want, but I cannot be tempted to use it for anything else. While driving, nothing is as important as keeping my eyes on the road and my attention focused.

I carry my Kindle, so if I do want to have something to do while sitting, waiting or eating, at least I can catch up on a good novel or article. I have access to millions of books on my Kindle, so it’s a surety that I can find something of interest.

When I’m at a restaurant or in an elevator or anyplace in public, the phone stays in my pocket and I look around and talk to people. Most of them even seem to like to have a friendly conversation with a stranger. It’s far more fun than starring at some dumb old phone.

I think this will help improve the quality of my life even more. After all, the world exists out there, not in some little tiny screen in the palm of your hand.