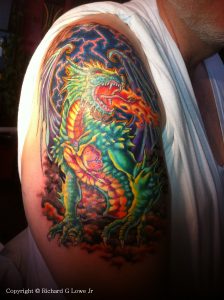 The last time I communicated with my parents they told me I was “lucky” to have a good job, to have friends, and to be where I am. What a degradation that was!

I was not a happy child. I spent most of my young years trying to be small, to stay hidden and out of sight, hoping against hope that my father would not take out his belt (or worse) and both parents would not take out their anger and emotion on me.I have few memories of childhood that did not include my parents, grandparents, aunts and uncles violently arguing.

School was worse than a nightmare. I was beat up on a regular basis by bullies looking for my lunch money, and tolerated, at best, by teachers who didn’t care.

I learned to pretend I was stupid, so that the bullies wouldn’t notice me and take out their anger upon the school nerd. I learned to fail tests, to get lower grades, and to not do as good as I knew I could to avoid getting noticed, because getting notice meant getting hurt.

According to my parents, I was supposed to be a doctor or something similar, someone who had a college degree and could make enough money to support them in their old age. I was such a disappointment when I dropped out of college to take a position as the vice president of a computer company.

My parents disowned me when I was 24, for reasons which I have never understood, violently, telling me I had a special place in hell reserved just for me. My father screamed that he wished I was dead and had never been born. He said he had no son and neither of them wanted to talk to me again.

When I was 33, I finally found my soulmate and married her, hoping to finally find happiness, she became chronically and horribly sick soon after. Worse, she had a son who learned very quickly that by making his mother cry, and thus causing asthma and an occasional visit to the hospital, he could get her to tell me to do what he wanted. He was her son, and to her he could do no wrong.

For many years I worked for a boss who actually was insane. He had a certificate from a psychiatrist, of which he was very proud, “proving” his insanity.

My parents, with their infinite wisdom, believed that people’s of other color, races, religions were, in some undefined and never-spoken-of way, wrong. These “other people” had their place, and the world was good as long as they stayed in their place, wherever that was.

When Claudia died, in many ways I died as well. My soulmate was gone. My love was gone. I was alone. I had no friends, no parents, no soulmate, no love. I had no one but myself.

I had no reason to go on.

Three days after Claudia breathed her last breath while I watched, I drove to Joshua tree national park and climbed to the top of a place called Skull Rock. For most of the day, which was cloudy and mildly stormy, I sat upon that rock, a very special place, and pondered my past, my present and my future.

I decided I am strong.

I decided I am ethical.

I decided I am intelligent.

I decided I can be right, I can have friends, and I can be happy.

I decided I don’t need to put up with anyone putting me down, making me unhappy or trying to ruin my life.

I decided I was most of all, going to be ME. I was going to chart my own future, make my own decisions, be my own person.

I have learned that people are people, regardless of their color, race, religion, gender, sexual preference or whatever. They are people, and should be understood as individuals and judged based upon their actions, not upon some silly bias.

I learned I make my own life; others only make my life if I let them.

I have a good job because I worked my ass off taking hundreds of courses, reading books, going to lectures, getting mentored by many people.  No, in spite of what my parents said, I am not who I am through luck.

My life is mine to create. is what you make of it. It is not what others make UNLESS I LET THEM. 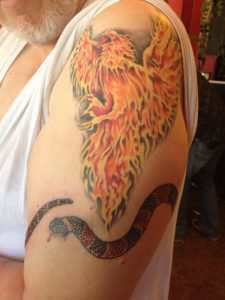 The phoenix symbolizes the change in my life, the rebirth from death. The dragon symbolizes what I am: smart, intelligent, handsome, powerful, and mostly, an individual and unique. The fire in both tattoos symbolizes that it has not been an easy journey, and it’s not over by any means.

So last night after watching Red Moon Dance Company perform at Knott’s Haunt, I wandered a bit, then sat down and stared into space. I realized how far I’ve come in the last few years. I have a good job, super wonderful friends, awesome hobbies, health and happiness like I could not have imagined when I was a child.

So to all my friends,belly dancers, rennies, artists, actors, actresses, computer geeks and all the rest, who have helped my on my journey, I thank you.I have many people to thank for their help in my growth and rebirth from those dark times, more than I can count.